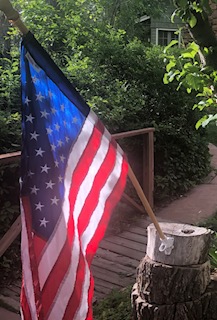 Covid raised its’ ugly head once again and altered the start to a much anticipated 4th of July weekend. Due to a few Cottagers testing positive (Please get well soon), the decision was made to postpone the first of three Sunday Schools and a T.A.R. Party to honor Bob Greer, who passed during the year.

The question then turned to the annual Cottager 4th of July tradition….proceed with the picnic or postpone/cancel. Given the picnic is an outdoor event and this year to be held in a large open space on the upper tennis court, the CCC Board chose to move forward with one caveat, no cookout…BYOFood. The CCC Board hosted the occasion on “neutral territory”, thus relieving the burden of individuals hosting. Cupcakes and cookies were provided (after all, dessert is the most important part of a meal, right?!). A wonderful entertainer by the name of Mike Heuer was scheduled to play from 6:00-9:00, but was cut short when rain and wind came through around 7:30. Cottagers then retreated to various locations to wait out the weather, which by dusk had improved. A Big THANKS to Margaret, “flameless” fireworks were projected on a large blow-up screen, complete with patriotic music, starting at 9:00. After about half an hour or so, the firework display continued, but the patriotic music morphed into a spontaneous karaoke event, thanks to some of the younger crowd.

To sum it all up, the evening was simply AWESOME! Some structure but a lot of impromptu FUN! The turnout was PHENOMENAL!

The new approach to a long-held tradition was a rousing success! For one thing, the Tennis Court is a large, FLAT space, allowing Cottagers to more easily mingle and visit, more space for setup, and room for other features, such as entertainment. Is this our new tradition? Seems like a Win-Win for all!

A BIG THANK YOU to EVERYONE who attended for making this year’s CELEBRATION so SPECIAL. Looking Forward to Next Year!
HAPPY BIRTHDAY AMERICA HAPPY BIRTHDAY CHAUTAUQUA